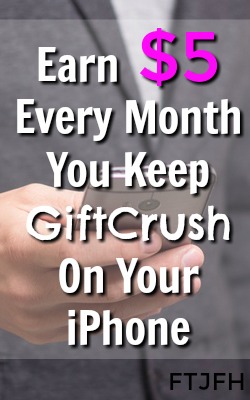 The GiftCrush app is a passive income opportunity that’s available on Android and Apple devices. This app does track usage of apps, so if you’re not comfortable with the privacy concerns I recommend skipping this opportunity.

The GiftCrush app is easy to install; once you spend those few minutes setting it up, you’ll earn money as long as you keep in installed. The Gift Crush app won’t make you rich, but you can earn around $5 a month just for installing this app! I recommend checking out these other 7 Passive Income Apps, to maximize your earnings.

In this review, I’ll cover how the app works, how to get paid, the complaints, and if this app is a scam!

In this Gift Crush App Review, I marked it legitimate. It’s an app that does pay you your earnings. I do have a few concerns, first, if you have any concerns about privacy, just skip this app. Earning $5 a month is not worth the hassle.

It also seems that this app works much better on Android devices, most of the reviews in the app store say that the app does not function most of the time. It seems that if you can get the app to work you’ll get paid, but there’s a chance the app won’t install or might cause your phone problems (more on this in the complaints.)

In my opinion, a $5 a month income, is probably not worth the headaches you’ll get making the app work.

The app is free to join and is available on IOS and Android devices. All you need to do is download the app and complete your profile. It should only take a few minutes and includes information like name, date of birth, and email.

Once you’re signed up, all you have to do is keep the app installed. GiftCrush tracks what type of apps you use and how long you use them.

The only complaints have to do with the app not working. In both app stores, the reviews are mostly positive from the people that got it to work. On IOS most of the issues happen while installing the app and setting up the VPN. A few reviews say that they had no problem downloading the app, but occasionally other apps won’t work because of GiftCrush.

On Android, there are reports of the timer until your next gift card acting up. They say that they still received payment, but it took more days than it was supposed to.

It seems if you can get the app to work, you’ll get paid, but I think the majority of people are having some issues. It doesn’t look like support is very helpful either.

The GiftCrush app is not a scam; they do pay their members. With that being said, I can’t recommend this app because there’s a lot of issues. In my opinion, it’s not worth messing with for $5 a month. If you’re looking for passive income, I recommend joining some of these 7 Passive Income Apps.

If you’re set on joining GiftCrush, you might as well download the app and see if it works. Chances are it won’t but maybe you’ll be an exception.

Passive income apps aren’t the only way to make money on your phone. Make sure to check out all the apps I use to make money.

Extra income not enough? Visit My #1 Recommendation to see how to make a full-time passive income online!

Do you think the GiftCrush App is a scam? Did the app work for you? I’d love to hear your thoughts on this review in the comments below! 🙂

2 thoughts on “GiftCrush App Review: Is Gift Crush A Scam?”