Mobee is an App that pays you to complete missions near you. These missions usually consist of going to local stores and answering questions about the store. Every time you complete a mission you earn points that can be exchanged for cash.

I’ve reviewed a few similar apps, and Mobee seems to be legit, as most of the others. The only way you could think this is a scam is if you live in a rural area. The app is location based so some of you might not have enough missions available to make it worth it.

Even if there are a lot of missions near you the Mobee app will not make you much money, if you’re interested in making a full-time income online, check out My #1 Recommendation, it’s how I made over $13,000 online last month!

In this Mobee App Review, I’ll cover how it works, how it pays, and all the important details about making money with this legitimate app!

How Does the Mobee App Work?

The Mobee App is available on Apple and Android mobile devices. You can join by downloading the app and entering the referral code: SPP1 to earn an extra 300 points when signing up!

Once you’ve joined, you can see all the missions near you. You can see them on a map or a list based on distance. You can easily see the location, how much it pays, what you’re required to do, and how long it will take.

Once you’ve found a mission you’d like to complete, just visit the store and start the mission. Most take 5-20 minutes to complete, require you to take a picture to prove you’re actually at the store, and answer 10-20 questions about the store. Once you’re done, you submit the mission for review.

With 24 hours of submitting a mission, your work will be approved, and your point earnings will be added to your account. You can then exchange your points for rewards!

In this Mobee App Review, I gave them a good score and marked it legit. As I mentioned, I’ve reviewed many apps that are similar, and I have to say Mobee is very good but is location based.

This app might not be worth it for some people who live in a small town, but if you live in the city, you should have no problems getting missions.

I like that the app is easy to use, but I feel like the rewards are a bit limited. Overall it’s a good app that can make you some extra income. 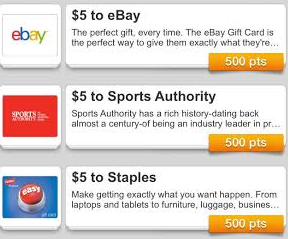 As you complete missions, you’ll earn points. Your points can be exchanged for gift cards within the Mobee App rewards section.

Honestly, the rewards are a bit limited, but gift cards start at $5 and go up to $100 values. The lower gift cards are available to eBay, Sports Authority, and Staples. You can also exchange points for free Redbox rentals.

My favorite way to get paid is via PayPal, but the PayPal gift card starts at $50.

All gift card codes are emailed and available inside the app.

How To Earn More With The Mobee App?

The Mobee App does have a referral program that pays you to invite your friends. They give you a referral code; mine is SPP1. They also let you invite friends through social media, email, and text within the app.

Once you refer a friend and they complete a mission you both earn 300 points.

Another easy way to earn extra points is through achievements. There’s a list of about 30 different achievements. Most of them have to do with the number of missions you complete in a particular category. For example, complete five restaurant based missions, and you’ll earn an additional 500 points!

One thing to keep in mind is that the Mobee App is location based. If you live in a large town or city, you should have no problem getting tons of missions to complete. But I live in a small town and only have a few missions available, but tons 200 miles away.

You might as well check it out and see what’s available, but know there’s a possibility you won’t have many missions to complete.

I talked about payments and rewards already, but I think this a major disadvantage of this app. They do have gift cards that start at $5 which is great, but I’m a big fan of getting paid via PayPal.

Mobee does have a PayPal gift card, but it doesn’t start until $50.

They do make payments so no worries there, but the different rewards aren’t the best I’ve seen.

Is Mobee A Scam Or Legit?

Overall Mobee is a cool app that pays you to visit stores and give your feedback on how well stores are dealing with customers, how they display items and more.

Mobee isn’t going to be a huge income but is a cool way to make some extra cash in your spare time or while you’re shopping at a store.

Keep in mind that Mobee isn’t for everyone, it’s location-based, so you may not have any missions nearby to complete.

If you’d like to learn more or to join, just download the Mobee app on your mobile device. To earn a free 300 points when joining, enter the referral code: SPP1

If Mobee isn’t going to work for you, check out some of the other mobile apps and extra income sites I highly recommend!

If a tiny income from doing missions isn’t for you, check out My #1 Recommendation, it’s how I made over $13,000 online last month!

Do you think the Mobee App is a scam? Have proof that it’s legit? Let me hear your thoughts on this Mobee App in the comments section below!

1 thought on “Mobee App Review: Is Mobee A Scam Or Legit?”