If you’re not interested in getting paid via Bitcoin, feel free to check out all of the other Extra Income Sites I Recommend.

Keep in mind that BitcoinReward is just an extra income site. If you’re looking for a huge income, this won’t be it. If you come across sites promising a considerable income with Bitcoin, be careful, it’s most likely a scam!

Let’s get started, in this review I’ll cover how to earn, how to get paid, and if BitcoinReward is a scam!

In this BitcoinReward review, I marked them legitimate, but it’s not really anything special unless you just really want to get paid out via Bitcoin.

If you don’t care about the payout method, I highly recommend these sites. They are much better and have higher payouts.

If you’re set on getting paid via Bitcoin, BitcoinReward seems to be legitimate, but they don’t pay fast. How To Earn At BitcoinReward

BitcoinReward does offer surveys on their offers page. They also have a separate tab that links to surveys from other providers. Like most surveys, you’ll see what it’s about, how much it pays, and estimated time to complete the survey.

Similar to other reward sites. BitcoinReward has offers you can complete to earn. Most offers have to do with signing up for a free site or mailing list. Other offers are considered paid offers, where you have to make a purchase or put a credit card down for a free trial.

You can passively earn Bitcoin by watching videos at BitcoinReward. You’ll earn 100 Satoshi for every three videos you watch. I’d say on average the three videos will last around 5 minutes all together.

BitcoinReward does have a referral program that can help you earn more. Honestly, this is probably the best part of the site, because you’ll earn 50% of all of your referrals earnings.

That means everytime your referral earns enough to cash out you’ve made enough to be halfway to the cashout amount!

Once your account reaches 30,000 Satoshi they hold payments for three weeks to double check for fraud.

As long as you honestly earned on their site, they will automatically release your payment after the 3-week holding period.

As mentioned, it does take a while to get paid by BitcoinReward, but they do actually pay! Here’s proof of a few cashouts I’ve had inside my BitcoinReward account and the proof it showed up in my Bitcoin Wallet. 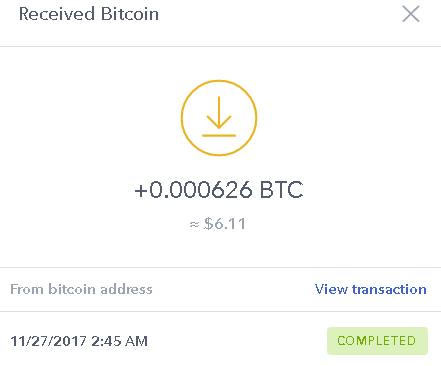 BitcoinReward does pay, but they do not pay fast. On their site, they say that once you reach the cashout amount, they hold payments for three weeks due to the amount of fraud on their site.

That is incredibly concerning, just because since there’s so much fraud, you might get flagged at some point and might not get paid. I haven’t heard of any complaints of this, but it’s possible.

I really wish they paid quicker, but I guess as long as they pay that’s all that matters.

You’ll be earning a small amount of points while you use the different ways to earn at BitcoinReward. When you get paid in bitcoin, it’s even less USD.

I know that the hope is that the price of Bitcoin rises once it’s in your account, but if you’re just looking to get paid for taking surveys, watching videos, etc. you can earn a lot more on other sites where you can earn PayPal payments and gift cards.

Visit the Extra Income Sites I Recommend to see the sites I use!

It seems that BitcoinReward is a legitimate site, but please keep in mind that this is a small extra income site. Just because it has to do with Bitcoin does not mean a big income, it actually earns you less than doing the same thing on other reward sites.

I probably won’t be using this site, the only way I could recommend it is if you’re just set on getting paid via Bitcoin.

With that being said, you will get paid after the long 3 week waiting period.

If BitcoinReward isn’t for you, here’re some helpful links:

Extra Income Sites I Use

Do you think BitcoinReward is a scam? I’d love to hear your thoughts and experiences with this site and other Bitcoin sites in the comments below!